Ammunition, often called bullets, is a basic component of firearms. It is the material that is expelled from the barrel of a gun to inflict damage on a target. Ammunition comes in many different shapes and sizes, but all have three common components: a casing, primer, and propellant. In this blog post, we will take a closer look at each of these components and discuss their function in ammunition. 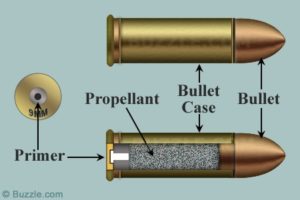 Ammunition typically consists of four basic parts: the projectile, the propellant, the primer, and the cartridge case.

The projectile: This is the bullet or other object that is fired from the weapon. It is propelled by the propellant, which is usually a powder. The primer ignites the propellant, and the cartridge case contains all of these components.

The propellant: This is what propels the projectile out of the firearm. It is usually a powder, but can also be a compressed gas.

The primer: This is what ignites the propellant and starts the firing process. It is located in the center of the cartridge case for centerfire ammunition, or around the rim of the case for rimfire ammunition.

The cartridge case: This holds all of the other parts of the ammunition together. It is made of brass, steel, or plastic.

Wad: A wad is a disk or cylinder of soft material, paper, plastic foam, cloth, or other compressible substance, used to seal the rear end of the shotgun shell and hold the shot together as it leaves the muzzle.

Other types of bullets include: 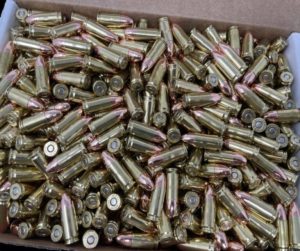 Hollow point bullets – These bullets have a hollowed out cavity in the tip. They expand when they hit the target, which causes more damage. Hollow point bullets are typically used for self-defense because they are more likely to stop an attacker than FMJ bullets.

Armor-piercing bullets – These bullets are designed to penetrate metal or Kevlar body armor. They are typically used by the military or law enforcement.

Incendiary bullets – These bullets are designed to start fires when they hit the target. They are usually used in warfare to cause damage to enemy equipment or supplies.

Explosive bullets – These bullets are designed to explode when they hit the target. They are usually used in warfare to cause damage to enemy personnel or equipment.

Tracer bullets – These bullets have a small amount of phosphorus in the tip. When they are fired, they leave a visible trail of light that helps the shooter aim. Tracer bullets are typically used in warfare or for training purposes.

Blank bulets – These bullets do not have a projectile. They are used to simulate the sound and recoil of a real gun for training purposes or in movies and TV shows.

What’s the difference between bullets and ammunition?

Bullets are what actually leave the barrel of your gun and hit the target. They are typically made of lead with a copper jacket. The term “bullet” can also be used to describe the complete round of ammunition (casing, primer, powder, and bullet), or just the projectile (the lead with the copper jacket).

What is the size of a bullet?

ACP stands for Automatic Colt Pistol. It is a type of ammunition that is commonly used in pistols.

What does AR stand for?

AR stands for Assault Rifle. It is a type of ammunition that is commonly used in rifles.

What does FMJ stand for?

FMJ stands for Full Metal Jacket. It is a type of ammunition that is commonly used in firearms.

What does HP stand for?

HP stands for Hollow Point. It is a type of ammunition that is commonly used in firearms.

Why is it called ammo?

The word “ammunition” comes from the French word “la munition”, which means “the supply”. The term was first used in the early 1500s.

What is the most common type of ammunition?

The most common type of ammunition is the 9mm. It is a popular choice for handguns and rifles.

What is another word for ammunition?

Another word for ammunition is “bullets”. Bullets are the projectiles that are fired from guns. They are typically made of lead or steel.

The answer is yes, bullet primers do indeed have a shelf life. Depending on the manufacturer and type of primer, they can last anywhere from one to ten years. Once a primer reaches its expiration date, it’s no longer guaranteed to ignite gunpowder and fire a round.

How long can you keep ammo in a magazine?

How long you can keep ammo in a magazine largely depends on how well-made the magazine is and what kind of conditions it’s stored in. Generally speaking, you can expect to get several years of use out of a magazine before it needs to be replaced. However, there are some things that can shorten a magazine’s lifespan, such as leaving it fully loaded for extended periods of time or storing it in a humid environment. If you take good care of your magazines, they should last for a long time.

Ammunition is made up of several basic components which work together to fire a projectile. Understanding these basics can help you select the right ammunition for your needs and ensure that you are using it safely.
The primer ignites the powder in the cartridge case, which then creates gas pressure. That pressure pushes against the bullet seated in the barrel, propelling it forward and out of the gun.
Different types of ammunition are designed for different purposes, so it’s important to know what you’re working with before you start loading your firearm. Make sure to ask an expert at your local sporting goods store if you have any questions about selecting or using ammunition.