Would you like to hunt bear? Are you planning to hunt a gun or bow bear? In this article i covered where to shoot a bear with a bow. keep reading to know more. One of the most challenging and exciting tasks on the planet is to use a bow to hunt bear. When hunting, nobody wants to just wound an animal. Not only is it not good practices of hunting, but it can also ruin your day. While injuring and failing to recover any animal is bad news, when it comes to hunting bears, it is particularly bad.

Nobody wants to talk about it, but failure to make a good shot when hunting a bear is something that should be avoided for the sport’s greater good. It’s important to learn how to make a good shot every time instead of worrying about whether you’re going to make the best shot. Here we’re going to tell you exactly where to shoot a bear to make sure you get a shot of killing.

Learning how to shoot a bear is not only important, but it is also important to know why. We’ve already covered the shooting ethics to kill, but now we have to talk about bear personalities. Bears are grumpy animals, especially older bears. Bears are usually fearless and extremely territorial in addition to short tempers. You’re going to be sad if you get a chance to shoot a bear and you miss or even worse make a bad shot that only wounds the animal. Not only sad that you missed a good opportunity, but also sad that you know you have on your hands a very angry bear.

What Equipment Should You Use?​

The good news is that you can use the same archery equipment to kill a bear to kill a deer. But, when hunting bear, do not use the same hunting tactics as you do. Why do you have to change your mentality? Well, as we mentioned above, bears have claws, they are extremely strong, and they have teeth that could tear apart a human being. Bears are not afraid of humans, unlike most whitetails. They are usually not even phased by them, in fact.

Where to Shoot a Bear with a Bow?​

Now, with a bow and arrow, we should talk about where you should hit a bear. There is no perfect shot for a bear unlike other animals. Bears are huge, giving you a ton of targeting body. Experts recommend targeting the “middle of the middle.” But what does that mean? First you have to stay away from the blades of the shoulder, these bones are very dense and difficult to get through. If you don’t hit the bear right, it’s unlikely to have a kill shot, which makes it highly unlikely the bear will drop and you’ll easily recover it.

A bear’s ribs are light, but there is still no great place to be targeted. The musculature of Bear is difficult to penetrate. The rib cage extends far beyond a deer and protects from broadheads their vitality. This is where the “middle-of – the-center goal” comes in. If you’re heading back to the middle of the bear, from top to bottom middle, you’ll get a great kill shot to avoid the shoulder blades of the bear and hit the vital organs.

Making bear bowhunters the biggest mistake is targeting too far back. The best chance of killing a shot is right above the front leg of a bear. Humerus and scapula make a large “V” shape. The perfect target is the inside of the V. But if you aim behind the leg, you’ll hit the scapula, which means you’ll probably wound the bear, requiring a ton of tracking or a second shot.

Another factor that needs to be considered when hunting bears is fur. Bears on their bodies have 3 “to 4” of hair. The fact that most bears are black is adding to the difficulty in determining what hair is and what body is. Black fur makes it very hard to determine a bear’s exact anatomy. All of a bear’s fur and fatty areas are not vital areas for shooting. Hunters must be able to contain their excitement when they see the bear and take the time to get a good shot.

Bears have very fluid movements in fact. Bears ‘ flexibility makes it even harder to choose which angle to choose from. A hunter must know exactly where the vital organs of a bear are in order to prepare for this situation–no matter in what position a bear is in.

How to Shoot a Bear from a Treestand?​

Most hunters choose to do this from a treestand when it comes to hunting bears with a bow. Hunters must be even more careful about where they place their treestand when using bait. Most hunters will select a site from their bait station about 15 yards away. Some people think this is a huge mistake, though. 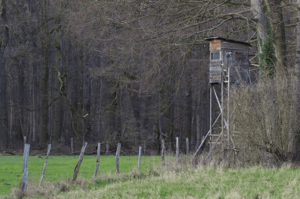 As we have discussed in great detail, bear hunting is key to shot placement. When standing on a treestand platform, hunters must be ready to hit the proper placement. If you are struggling with this, choose a spot that is at least 20 yards of bear bait for your treestand. This minimizes the risk of only one lung being hit. You still want to go to the middle of the middle as well. You should aim for the top 1/3 of a bear when you’re standing from a treestand.

Where to shoot a black bear with a bow?

Going with a bow on your first bear archery hunt? It’s amazing. Below are some tips on what a black bear with an archery tackle needs to know about shooting. Whether you’re using a mechanical or fixed-blade broadhead to hunt for bear, you need to know where to go. An arrow passing through both lungs is the ideal shot for big game animals. However, it is even more important to remove both lungs when hunting black bears. Bears are hard and on one lung can run a long way. Wounded bears are also known to leave poor trails of blood, especially if the arrow has not passed through. Their thick, fat hair can quickly close a wound. However, an arrow through both lungs typically causes the bear to drop in sight.

So that’s the goal, but how can we do that? The anatomy of a black bear is a bit different from that of a deer or other ungulates. Their lungs are somewhat further back and their shoulders are somewhat further forward. Look at the anatomically correct vitals on the archery targets of the MasterTarget paper below:

Many hunters of deer use the near leg as a point of reference. To settle the pin on the heart / lungs region, they follow it down to the lower chest. You’ll miss the lungs completely if you follow the same routine with a black bear. Rob Nye, Canadian bear hunting guide, recommends targeting the “middle of the middle” or exactly where the midpoint of the front and back legs intersects with the midpoint of the belly and back.

He wrote this on the forum at bowsite.com: I have guided (or helped guide) 15 bowhunters so far this season, most of them for bears ‘ first-timers. 13 Bears shot or quartered away in the middle and dead within 30–80 yards, 2 shot in the shoulder and still going. Last night, one was shot: ran 30 yards, walked another 20, and tipped on video, dead in less than 10 seconds. 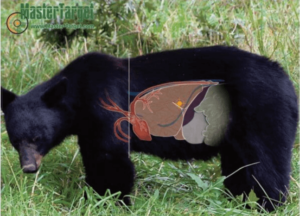 We love those quick recoveries as bowhunters. This approach also takes the front shoulder out of the equation–which can be easily flirted with on a whitetail. I’d follow Nye’s advice verbatim on a quarter shot away. I like to creep just a hair to the left of the middle on a wide-sided shot. This gives me a bit more room to wiggle. If I slightly pull the shot right, it will probably still hit the lungs, not the liver.

And by the way, the only ethical bowhunting shots on a bear are a broadside or quartering-away shoot. Wasp broadheads will break the ribs like toothpicks, but on a quatering-to-shot, the front shoulder shields the vital and is no match for any broadhead. So get a bear target (like this paper target) with the vital marked on it and get used to targeting back a little bit. Choose a Wasp fixed-blade broadhead (or mechanical if your draw weight exceeds 65 pounds) and we promise that it will do the job.

Where is the best spot to shoot a bear?

There is no one definitive answer to this question. It depends on many factors, such as the type of bear you are hunting, the terrain you will be hunting in, and your own personal preferences.

Where do you aim an arrow on a bear?

Again, there is no one perfect answer to this question. It depends on the type of bear you are hunting, the size of the bear, and where you are aiming for a clean kill shot.

How do you bow hunt bears?

The process for bow hunting bears is similar to that of other animals – find a place where they are likely to be, set up a blind or stand, and wait for them to come to you. When the bear is in range, take a careful shot.

What caliber is best for bear hunting?

This is a debated topic among hunters. Some say that larger calibers are necessary to ensure a clean kill, while others argue that smaller calibers are just as effective. Ultimately, it is up to the hunter to decide what they are comfortable with using.

Can you eat bear meat?

Yes! Bear meat is actually quite tasty. It can be cooked in many different ways, and can even be made into jerky or sausage.

No, a .45 caliber gun is not powerful enough to stop a bear.

Will an arrow penetrate a bear skull?

Yes, an arrow can penetrate a bear skull if it is shot with enough force.

How do you hunt a black bear with a bow?

You need to be very accurate when hunting a black bear with a bow. You should aim for the chest or head area.

How do you shoot a bow and arrow with a bear?

You should stand still and take careful aim before shooting. If the bear is charging at you, you may need to shoot more quickly.

Where do you aim to shoot a black bear?

The best place to aim is the chest or head area. This will give you the best chance of hitting a vital organ and killing the bear.

if you want to shoot a bear with a bow, there are a few things you need to keep in mind. First, make sure you have the right equipment. A good quality compound bow is essential for success. Second, practice regularly so you can be confident in your ability to make a clean shot. Third, know where to aim. The vital organs are located in the chest cavity, so aim for the center of the body mass. Finally, be patient and wait for the perfect opportunity to take your shot. By following these simple tips, you will increase your chances of harvesting a trophy bear with your bow!

Where to shoot a deer with a crossbow?

Where To Shoot A Deer Diagram?